Whilst not wishing to leave aside the polluting aspects of salmon aquaculture to the marine environment, the scope of this organisation is more related to direct effects on wild salmonids so we must now look seriously at the probable transmission of disease from salmon farms to wild fish.

There are a number of diseases which are notifiable to the Department of Agriculture, Food and Marine under E.U COUNCIL DIRECTIVE 2006/88/ EC. Notifiable diseases such as Infectious Salmon Anaemia (ISA), Viral Haemorrhagic Septicaemia (VHS) and Infectious Haematopoetic Necrosis (IHN) are officially absent from Ireland but with expected increases in production there is every reason to believe that these pathogens will eventually arrive at our shores through imported ova, equipment and infrastructure. Ireland is also free from other significant diseases affecting finfish such as Gyrodactylus salaris and Bacterial Kidney Disease.

However, other diseases and conditions are prevalent on Irish fish farms and are a very large problem to salmon farming around Ireland, notably Amoebic Gill Disease (AGD), Cardiomyopathy syndrome (CMS) and Pancreas Disease (PD).

The causative agent is Paramoeba perurans, an amoeba which infects the gills of a wide variety of fish species. The main problem with this parasite is that it affects gill filaments and as such is capable of large scale mortality due to secondary infection of compromised tissue. It is contended that farms affected by Paramoeba perurans could effectively be acting as large scale environments for the production and distribution (through ocean currents) of vast numbers of this amoeba which, in turn, may affect wild salmonids.

Sea trout, a species which may spend both long periods of time inshore and in vicinity of salmon farming areas, may be at increased risk of being infected. The outbreaks of AGD appear to be more prevalent in Ireland in the period May-July but also in autumn although the diagnosis and manifestation of the disease may be delayed and could be present at other times of the year.

Sea trout are present throughout the coastal areas during these periods and it has been noted in a study by the Norwegian Scientific Committee for Food Safety that sea trout in the wild may become infected by P. perurans in areas where AGD is present on salmon farms.

Indeed other species of fish in the wild may be at risk and are as yet unidentified, principally due to lack of focused research internationally and in Ireland. The possibility of infection of wild salmonids by the causative agent of AGD, Paramoeba perurans, has certainly not been adequately investigated in Ireland.

According to the International Council for the Exploration of the Sea (ICES) “Piscine myocarditis which is commonly referred to as cardiomyopathy syndrome (CMS) is an economically important disease of Atlantic salmon, Salmo salar in seawater. Characteristic heart lesions primarily involving the myocardium are reported in natural outbreaks with associated mortality. This disease should be regarded as chronic which is associated with a necrotizing severe myocarditis involving the atrium and the spongious region of the heart ventricle and primarily observed in adult or maturing fish after 12 to 18 months in seawater. Piscine myocarditis was originally described from farmed Atlantic salmon, S. salar in 1985 but has subsequently been recorded in wild Atlantic salmon along the Norwegian coast. It is suggested that cardiac function would be impaired and therefore could compromise such migratory fish. Piscine myocarditis is caused by a double-stranded RNA virus named piscine myocarditis virus (PMCV) with structural similarities to the Totiviridae family. ”

The virus PMCV is spread through the water column and as such may now be present in wild salmon and sea trout. The salmon farms, with their abnormally high densities of fish, are acting as a large reservoir for the production and distribution of this virus. No real effort has been made to investigate whether wild salmon and sea trout are being affected. This disease is present in Ireland and is a danger to wild fish stocks.

Another disease which is noteworthy is pancreas disease (PD), caused by the salmonid alphavirus (SAV), which has been evident in Ireland since the early years of the industry. Again there has not been effective research to examine potential impacts on wild salmonids. 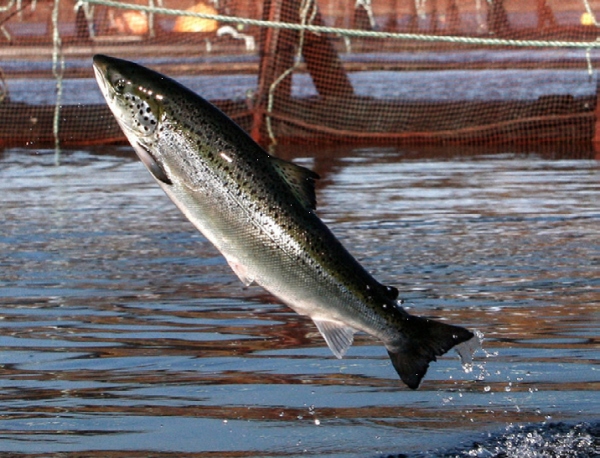 Generally it is difficult to quantify what effect these diseases are having on wild fish.  Most fish affected may die or be compromised to an extent whereby they are at risk of increased predation. If you don’t look for a problem you will inevitably not find one.

Unfortunately lack of funded research into harm caused to wild fish by salmon farms is evident. This appears to be the policy of regulatory bodies here and abroad, thus protecting the industry from scrutiny.

Other environmental and biological conditions also affect salmon farms. Harmful algal blooms cause anoxic or toxic conditions for the farmed fish while the threat of jellyfish blooms is now ever-present in our increasingly warming environment. These factors may cause up to 40% mortality on fish farms which may impact on animal welfare regulations.

The fish farming industry is operating worldwide and the bottom line really is profit before environmental well-being. This is not unusual in any agricultural activity and all agriculture causes problems to ecosystems at varying degrees.

The simple reason why new technologies have not been embraced is that there is a large degree of increased capital outlay involved in closed containment systems which while operating on the world market would not be capable of achieving parity with other countries if this technology was not mandatory in every jurisdiction.