SWIRL demands a concerted programme for the removal of all redundant river barriers within the next ten years and the optimisation of migratory fish passage on all other major barriers.

SWIRL is committed to addressing the removal of man-made barriers to migration for Atlantic salmon and sea trout in rivers and supports designs that facilitate all fish migration.  A properly functioning ecosystem is necessary to facilitate the optimum production of salmonid juveniles in freshwater. 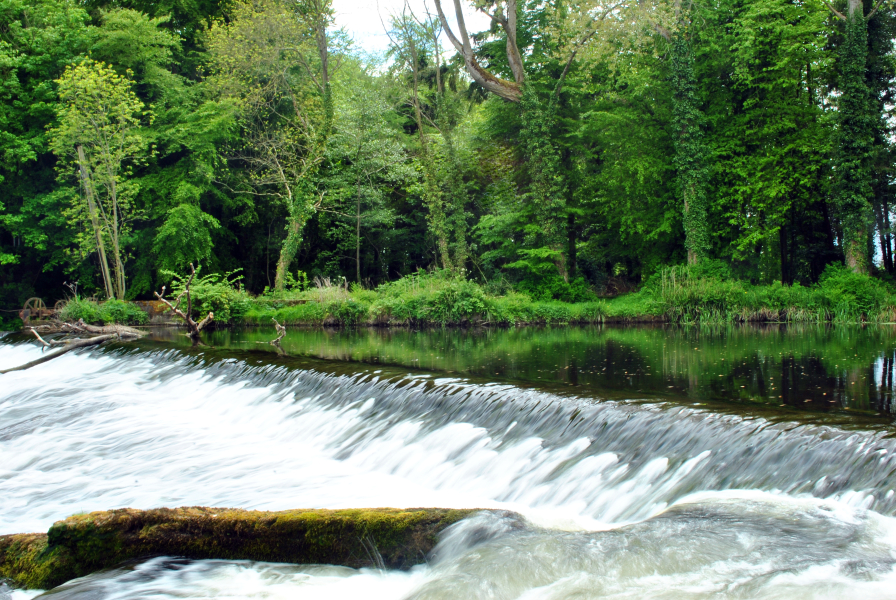 A typical weir with a fish pass facility. Note the ponding effect upstream. This weir will affect migration and facilitate predation. Removal would certainly improve productivity.

There are many and varied man-made obstacles to fish migration. The majority of these obstacles are now defunct in that they do not serve the purpose for which they were built. SWIRL is, however, cognisant of the environmental and economic problems which may surface with the removal of certain structures.

The effect of removal is extremely important as salmonid studies show that the ponding effect by a weir is indicative of very poor salmonid juvenile stocks and productivity. If a weir is removed then the river above will become substantially more productive and return to its natural form with pool/glide/riffle habitat becoming established.

All weirs cause a substantial barrier to migration and a haven for predation due to fish being delayed in upstream or downstream migration. As NASCO noted in a 2015 report:

‘Barriers to migration in fresh water and in estuaries, whether natural or man-made, can block or delay access and may lead to increased mortality through, for example, diseases, predation and, in the case of smolts and kelts, passage through turbines.  Delays in smolt migration may also affect their survival when they enter the sea’.

Fish passes help with migration but are in themselves impediments to migration.

IFI is mandated under the River Basin Management Plan for Ireland 2018 – 2021 to assess barriers to fish movement in all Irish water bodies.  IFI is also involved in the Adaptive Management of Barriers in European Rivers (AMBER) project (of the EU) Project Link which seeks to raise awareness of the problems posed by stream fragmentation, the pressures on freshwater ecosystems and the need for innovative solutions.

There are a large number of rock ramps built in Ireland to aid migration but while these improve the situation by lowering a section of an obstacle they have little effect on ponding.

The vexed question of weirs and dams which are being used for their intended purpose causes enormous problems for migrating salmonids. Essentially the private weirs in this category must be compelled to manage water flow to support salmonid migration. Each individual weir has its own particular problems and a sensible managed solution must be arrived at by all stakeholders.

SWIRL views with concern the increase of interest in small hydro generation of electricity and their associated river barriers.  It is essential that local authorities enforce the requirement for an appropriate assessment of the impact each such application may have on protected species such as salmon.

In regard to the large hydro schemes there appears to be no legal pathway to compel the ESB to substantially improve fish migration facilities. The only real solution is to bypass these facilities as all other solutions involve fish having to face the turbine challenge on their downstream migration.

There are many innovative fish ladder and bypass channel designs available which could certainly be pursued but the reality is that all these solutions would require substantial investment and there is no legal imperative for the ESB to fund them.  The sole exception is the Shannon at Ardnacrusha where Irish Water are in discussion with the ESB about measures at Ardnacrusha and Parteen Weir which might be accomplished as part of the major water extraction project.