Marine Harvest – Smolts or Not

Hereunder find documentation regarding the gross over stocking of a smolt hatchery by Marine Harvest and an incredible situation where Marine Harvest over stocked Inishfanard salmon farm (Cork) by an incredible 400,000 smolts. The argument in regard to the Inishfanard site is that Marine Harvest did not agree that fish stocked were in fact smolts but post-smolts despite transfer from their own hatchery. Licence conditions explicitly mention not more than 400,000 SMOLTS can be stocked on the site but over 800,000 were stocked by MH.

At least one department official agreed that sites should have their licences revoked but alas legalities are cited as a reason to effectively do nothing with the exception of meeting MH and effectively telling them not to do so again. This matter requires the attention of all NGO’S and must be a focus for the EU and NASCO. Marine Harvest have effectively usurped the Department due to their dominant position within the industry.We at Salmon Watch would like to thank Friends of the Irish Environment for releasing this documentation.

The Sunday Times today covers FIE’s publication of two Submissions to the Minister for Agriculture, Food, and Fisheries by the Principle Officer of the Department’s Aquaculture and Foreshore Division revealing gross overstocking and recommending the withdrawal of Marine Harvest’s salmon farming licences in Donegal and Cork. 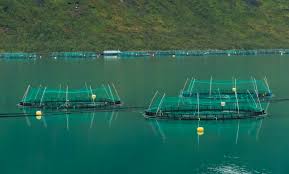 Marine Harvest is a Norwegian multi-national which has bought up local fish farm licences and now produces more than 80% of Ireland’s farmed salmon.
In the case of Donegal’s Lough Alton, which supplies 80% of Marine Harvest’s smolts, ‘by its own admission the company exceeded its stocking limitation by a significant degree (17%) for commercial reasons,’ the Submission states.
‘Persistent’ requests for an action plan to address the breaches by Donegal County Council had been met with a refusal by the company who ‘cited economic reasons for not implementing the of treatment facilities which their current production rates would demand in order to achieve compliance’.
The Principle Officer states ‘It can be reasonably stated therefore that the company knowingly breached the terms and conditions of its licence to a substantial degree for clear commercial gain’.
At Inishfarnard in the Kenmare River Special Area of Conservation, gross overstocking has been recorded in the annual Department’s Fin Fish Farm Inspection Reports since 2012. The Inishfarnard site, which is licensed to contain no more than 500 tons of fish, had a standing stock that was 26% above the permitted level before the input of 820,604 young fish in March 2014, this input itself being 105% in excess of the permitted level of 400,000 fish.
Marine Harvest called the licensing system ‘Anachronistic, legally and technically meaningless in its application to modern good farming practice’.
FIE published the Submission as part of its presentation to the recent Oral Hearing of a number appeals against the company’s proposed new salmon farm in Bantry Bay. They told the Oral Hearing, held in Bantry earlier this month, that ‘an applicant who openly informs a licencing authority that he has no intention of meeting his licencing conditions is not a fit person to hold a licence’.
Read the astonishing reports
Friendsoftheirishenvironment.org/…/MH_overstocking_document…
Read the Press Release
http://friendsoftheirishenvironment.org/…/17445-minister-bl…